Getting lost can be a great opportunity

After spending a couple of interesting days at Nuremberg, it was time to push on to somewhere new for a change. One option was to head further south towards Stuttgart and possibly see the Porsche Museum there? That sounded like a bit of a plan, so time to hit the road again…

The weather recently has been a bit varied, often with three types in one day! Today I had a mix of beautiful sunshine, heavy downpours and then over the forested hill roads, there was low hanging cloud swirling its way through the trees and across the roads. Eerily beautiful in its own way! With all the driving so far, you might think I would have got bored with it by now, but I genuinely enjoy it! I guess it has something to do with this…

‘The very basic core of a man’s living spirit is his passion for adventure. The joy of life comes from our encounters with new experiences and hence there is no greater joy than to have an endlessly changing horizon, for each day to have a new and different sun’ – Christopher McCandless – Into The Wild’ 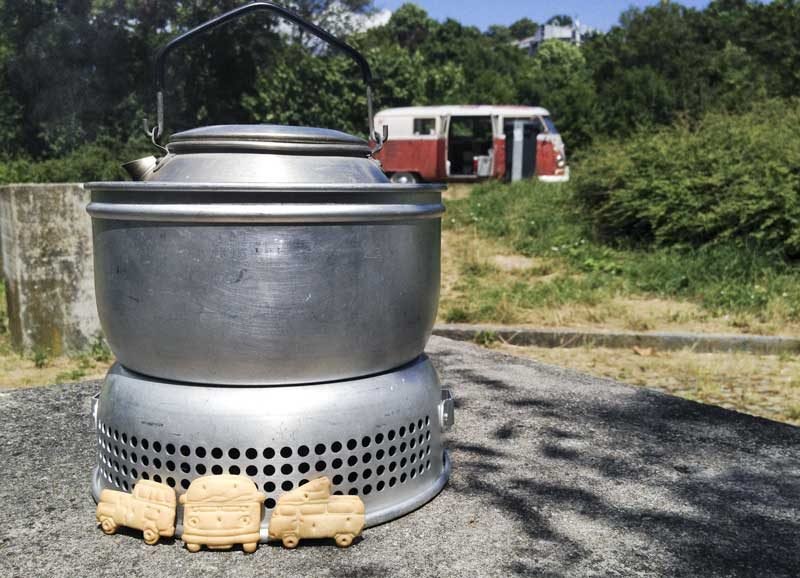 roadside tea break with Trangia stove and Hessisch goodie bag Leibniz Das Original biscuitsAlways good to break the journey up with a food and drink stop 🙂 I’ve had my old Trangia stove since when I was a teenager in Scouts, and it never lets you down! On this tea break, I delved into my Hessisch Oldendorf HO17 show goodie bag, time to try out the Leibniz DasOriginal VW inspired biscuits… very moreish indeed. I don’t think these will be making it all the way back to the UK!

As I was apparently drawing closer to tonight’s stopover destination, I had the increasing sense it might not be what or where I thought it was going to be? The roads were getting far less travelled, and the destination seemed more and more remote. When I arrived at the ‘destination’ it was clearly not what I had been expecting. I think I must have made an error when I input the Longitude/Latitude coordinates in my TomTom sat-nav. Technically you could say I was a little lost and off my initial planned route/destination!

However, I had inadvertently got ‘lost’ in the rather stunning location of Wanderparkplatz Roßbergwiesen, a recreation area south of the district of Gönningen, below the Roßberg lookout tower. Sometimes getting lost is a good thing! In this case, it most definitely was! I’ll be adding these coordinates to my sat nav in the favourites list… 48°25′10″ N  9°9′7″ E

The next morning I woke to a stunning view and was excited to have a little explore of the area. Near the woods in the distance, was an area under some trees with a couple of pre-built, stone fire pit circles? As the day went on I soon discovered, that friends/families came out here for the day, bringing their own wood and food to have open fires in the countryside. It was clearly a beautiful destination to come and unwind in, with plenty of space to run, ride or chill out in.

I took the hint. I had food and supplies, so rather than push on to Stuttgart and the Porsche Museum, I might just take a couple of days out to just simply enjoy doing nothing. The Italians have a concept for this known as ‘La Dolce Far Niente’ which roughly translates to ‘the sweetness of doing nothing’ 🙂 I’m not the best at just doing nothing, but it was good to recharge a bit and just enjoy the area.