Exploring the Isle of Lewis

Kind of odd that within the first few days of being on the Isle of Lewis, I’m already hopping onto another Island! The Western Isles are made up of literally hundreds of different sized islands that go to make up the island collective that is the Outer Hebrides. Of these, there are six main islands – Lewis, Harris, North Uist, Benbecula, South Uist and Barra.

Whilst most of the other hundreds of smaller islands are uninhabited, some are lived on, but only with a small population. I thought I’d initially spend some time exploring the western side of Lewis. Then spend a little time on the small island of Great Bernera just off the western coast of Lewis. No ferry is needed in this instance. The island is reached by a bridge.

It’s not always about the destination. Often the journey itself is equally memorable. Partly why I enjoy road trips so much. Travelling around the Lewis and on the way to the small island of Great Bernera, the landscape was stunning. I was definitely in no rush in getting to places. It was lovely to just enjoy the drive and soak up the surrounding scenery. 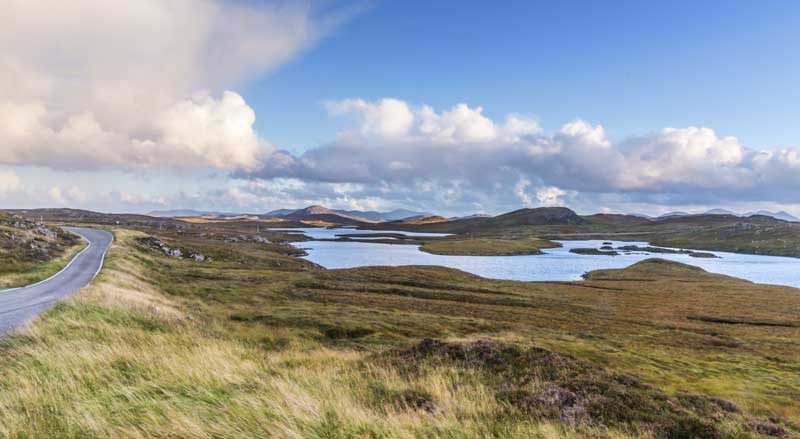 Not just the destination, the journeys are pretty good as well

The drive over to Great Bernera was stunning. My kind of road and landscape to be in and experience. Waking up here with the sound of the waves, that is just the icing on the cake. I was up nice and early, so thought it would be a great start to the day to take my Trangia down and make my breakfast on the beach. Seemed rude not to when I had the whole beach to myself.

If that wasn’t a good enough start to the day, I glanced up whilst waiting for the kettle to boil, and I saw a seals head pop up out of the water! Then a few minutes later and a couple more seals came to join the first one to say hello to me. If that wasn’t good enough, whilst enjoying my morning tea, there was an eagle soaring overhead! Nothing quite like seeing wildlife in its natural habitat. That’s a breakfast treat I’ll remember for a while.

One of the reasons I wanted to go to Bosta beach in the first place, was that I had heard of an interesting art project called ‘Time and Tide’ that was there. It’s an art installation from 2010 of a ‘tidal bell’ that has been designed by UK sculptor Marcus Vergette and Australian bell designer Neil McLachlan.

There are various tidal bells that have been installed around the UK at different locations. Each bell rings around high tide; the bells provide a reminder that rising sea levels caused by climate change will make the pattern of their ringing change. I thought it was a great concept and initiative. It works on many different levels. It would be interesting to go visit some of the other installations at some point now that I’ve seen this one.

There were plenty of interesting places to explore and cool stopovers to discover in the area. One of the many things I love about Scotland as a whole. One such beach front stopover had options on either side of a crescent-shaped causeway on each side of the bay. I arrived at one side of the bay, but my TomTom sat nav indicated that the site I was heading to was on the other side, accessed via the causeway that cut behind the beach.

There seemed to be some evidence of a track heading towards the causeway, so I proceeded to drive across. It was a pretty rough and beaten up bit of track, so I took things nice and steady slowly making my way across. On the other side of the beach, I was met by a great couple from Edinburgh camping out in their camper van. On my arrival, they very generously offered me a rather nice glass of Whisky. My kind of people I thought. They had watched me get the T4 camper over the causeway and thought I deserved a drink for achieving it! They were not sure it was possible or that I was going to make it! That kind of made my little causeway ‘off-roading’ experience all the more worth it!

We had a fun evening chatting about all sorts and exchanging suggestions of good places we’d visited that the other might enjoy. These random first-time friendships are another great part of road trips. You get to meet all sorts of people in ways you can never predict. It makes the journeys all the more fun and interesting. It was only after the event of me crossing over that I read that the causeway ‘road’ was described online as…

‘The road that joins these two sites together is for 4x4s only or the very brave.’

Although the Outer Hebrides is fairly remote and wild, they have been inhabited for thousands of years. At Bosta beach there is a reconstruction of an ancient iron age dwelling found near the site. A short drive away back onto the mainland of Lewis, there is also Gearrannan Blackhouse Village that has a collection of traditional pre-1800’s ‘Black Houses’, a style of a domestic house designed built in response to the weather conditions of the islands.

Interesting to see the details of the construction. Two huge thick concentric dry stone walls with a gap between them filled with earth or peat. An early form of cavity wall insulation? The roof was either thatched or covered in turf and tied down with netting with large stones pegged and tied in at the ends. Inspiration for contemporary turfed or sedum green roofs as often seen on Grand Designs contemporary eco-friendly buildings.

The roof shape is a nod to the Blackhouse design, and the colour and use of the corrugated sheeting is a reference to the agricultural buildings found on the islands. I always love looking at various buildings on my travels. However, as a bit of a contrast, next stop, from something new to a Neolithic monument that’s over 5,000 years old…