Having just driven over the cool causeway from Berneray to North Uist, the weather and the landscape began to change (yet) again. Now there’s a surprise! Always expect the unexpected and learn to embrace change. However, this made for a great late afternoon drive and it wasn’t too long before I found another location for the night with glorious views thrown in for free. Road trip life is good!

The rain was stopping, and in the golden hour afternoon sunlight, I was treated to yet another rainbow. Seriously, how many unicorn conventions take place in the Outer Hebrides? That’s it, no more rainbow pictures from here on in! Tomorrow I can start exploring the various islands that link up and form this part of the Outer Hebrides archipelago; North Uist, Benbecula, South Uist and Eriskay.

My cup of tea

Now I totally get, that this kind of environment and landscape (even my back to basics mode of traveling around) is not everyone’s cup of tea. It’s very much a rugged kind of beauty. It can be pretty sparse and desolate, but I find it totally engaging. I cannot confirm or deny, but apparently, I come alive on road trips, especially in this kind of landscape.

It was fun going down random single track roads just to see where they went and what there was to see. I like the concept that nothing is ordinary, it’s all just a matter of perspective.

Loved this traditional little cottage and outbuilding on the shoreline. You might notice that there is a big pile of peat stacked up against the side of the wall. This has been a traditional source of fuel for heating on the islands, with a long history behind it. You saw strips in some of the boggy areas of land where individuals would still cut their peat on the Isle of Lewis, especially in the north of the island. It can’t be cut on a large scale commercial basis, but individuals can maintain the practical use and local traditions.

I saw a similar building under construction so stopped to have a chat with the builder. He was a really friendly guy and showed me around the building in progress. It was being built to have the external appearance of a traditional thick stone walled cottage, but inside, it was constructed to conform to current building regulations. So you got the best of both worlds. Traditional looks with modern day performance.

First, there was the rain, and now the wind was beginning to pick up. I met a man out mountain biking who had moved up from North Yorkshire eight years ago. We stopped for a chat and I was asking him how he found it living up here. He was telling me about how many times the wind can gust well in excess of 100mph! He said the ground around the beach cove where we were standing, waves can cover this in the storms too! It’s a tough and hostile environment at times. It’s shaped not just the physical landscape, but I’m sure of the lives of those who live here too.

I got to one potential camping spot just behind some tall sand dunes at the beach. Looked good, so got out to do my customary exploration of the area. When I reached the top of the dunes, I was literally struggling to stand up, the wind was so strong! I later found out that that the winds on that day were 50-60mph. It could be described as a touch bracing!

When traveling across North Uist, Benbecula and South Uist, you are struck by the wide expansive nature of the landscape. The land seems to be perforated by numerous lochs of various shapes and sizes. At a passing casual glance, the colour of the landscape seems to be pretty uniform and earthy in tone. However, if you get up close and personal, the truth is far from that. As always, it’s all in the details.

So often nature is a source of massive inspiration, especially within the creative industry. You can see these kinds of dramatic and vibrant colours and textures used in the Harris Tweed that the Outer Hebrides is world-famous for. I quite fancy the idea of using Harris Tweed to get my Splitty interior reupholstered one day? I might need to start saving up for that!

It’s been a fun few days on the Uists, with so much to try and take in. It has been a fairly brief whistle stop tour making my way across the islands, but before you know it, I’m crossing another cool causeway to the last small island of Eriskay, just off South Uist

This road trip was intended to give me an overview or taster of what the Western Isles has to offer. Rather than it just being a bunch of islands you see on top left of the UK weather map. I really want to come back and spend some more time here again. It’s a pretty captivating place to be and explore. 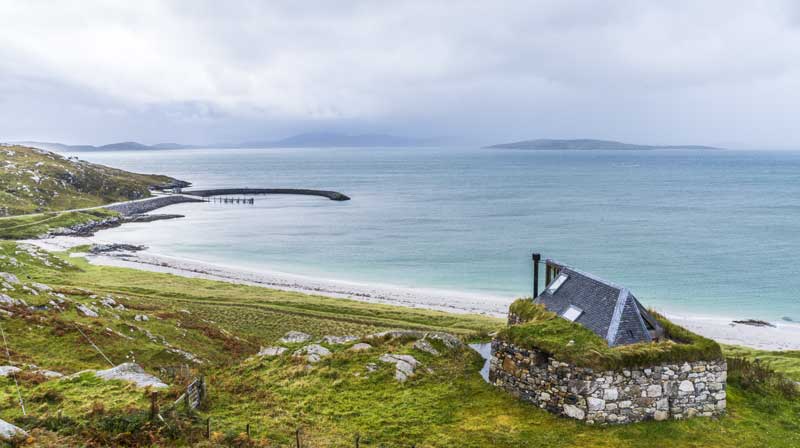 I’ve been really looking forward to visiting Barra for ages. There is something crazy there I just want to see with my own eyes…