Dubs on your doorstep

It’s always fun road tripping to vintage VW shows in Europe. It turns a show into a mini adventure. But when there’s a new ‘Dubs at DLWP’ event just up the road at De La Warr Pavilion (DLWP) in Bexhill, it does make things a lot quicker and simpler to get to!

My bus buddy Ollie had grabbed a couple of early bird tickets for the event, and is often our way, we rocked up a bit late and yet still managed to get ourselves a prime location in the car park area in front of the fantastic architectural masterpiece that is the De La Warr Pavillion.

Bexhill, being just a few miles up the road from Hastings,  has the added bonus that my wife Lorna is far more likely to be able to come along for the day now that she’s finished her MA at the Royal College of Art in London 🙂 Being together in the bus always makes any journey that much more special!

The show wasn’t specifically aircooled VW’s only, so wasn’t sure if it would be over run with more modern water cooled VW’s, but fortunately there as a good mixture of vehicles on display. Plenty to keep everyone happy, even those that love classic American vehicles. After all, who doesn’t love the gorgeous gurgle of V8 as it rumbles on by! 🙂

As much as I love the look of original paint/survivor vehicles, it was great to see this beautiful lowlight Karmann Ghia by Pete Morley of Californian Classics I had only previously seen pictures of this online, but close up in the metal it did not disappoint. Great looking car that sounds as good as it looks!

Amongst the various four wheeled vehicles on display, it was also good to see some funky two wheeled wonders by Slaughter House Customs that had some very cool additions. It’s all in the little details. Beautiful looking bike! 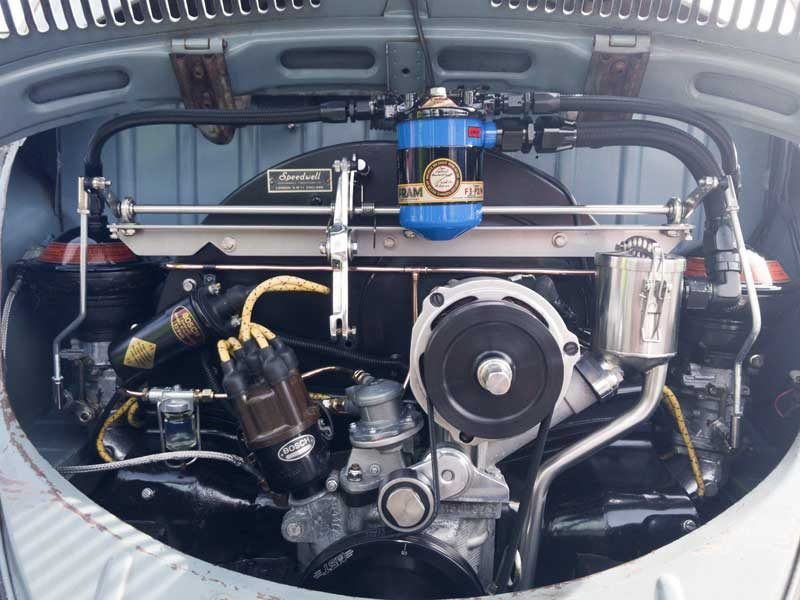 As some of the regular readers and followers of vdubxs will no doubt know, I do love a cool pop top! OK, so maybe its not original factory specification material, but if it’s missing, why not go funky with some multi coloured stripes… love it! 🙂

Not bad for a first attempt

For a small first time show, I thought it was both really well organised, and very well attended. Being in such a prominent public location, by such a architectural landmark clearly helped attract visitors who were visiting for the day. Great to see that so many people had brought a range of different classic VW vehicles to the event.

It was fascinating to hear comments from members of the public when they invariably stopped for a chat and questions about the vehicles. So many had their own recollections of ownership of them their selves. There really does seem to be an almost universal enduring long lasting affection for them!

People were sometimes surprised it was still working or that I went abroad camping in it. Of course there were the more predictable questions about ‘when was I going to paint it’ which always makes me smile, to which I have designed a tshirt as a reply… 🙂

But for those that love their paint shiny, there was plenty to catch the eye. Like this super cool early bay next to a very tidy looking split screen bus, both gleaming in the summer sun.

How to make an entrance…

A bit of a late entry at the end of the day, but this hard core rat rod was hard to ignore! What impressed me most was that a family of four got out of it when it parked up! Quirky and fun, an ideal Mad Max extra. Awesome ride if you’re doing the school run or shopping then!

Someone with a lot of skill, patience and a steady handy really put their mark on this cool bug. Loved the illustrations and typography on this unique looking Beetle.

Being beside the seaside it would be rude not to have an ice cream and a brew up (or two) during the day, after all that helps make the day complete.

All in all it was a great day out. I really hope this becomes a regular event each year after such a positive debut event and turn out