There are VW shows, and then there is the Hessisch Oldendorf International VW show! I was lucky enough to go to the last show (HO17) and was completely blown away by the event. So when the tickets and dates were announced for the 8th show in 2021, I was really excited. I got a reminder from one of my friends about booking the tickets. I acted quickly and booked my ticket. Good job too. The tickets pretty much went in the first day or two!

Something to look forward to

In these crazy times of Covid-19 lockdown, a cool VW show in Germany might just be what’s needed to look forward to! It’s an event that only happens every four years, and 2021 will be the events 8th show. Judging by how quickly the tickets sold out, I’m sure it’s going to be quite some event once again.

With everything that’s going on at the moment with lockdown pandemics and Brexit (huh, remember that that?!), everything feels a bit up in the air at the moment. So having something that’s over a year away to look forward to gives me no excuse for not having time enough to plan or sort any jobs I want to get done! Like the bus plywood headliner for instance! No, I haven’t forgotten about that!

It was my first time at the event, and it really did not disappoint!  With over 900 registered vehicles, hundreds of air-cooled visitors vehicles, some 45,000 visitors and over 1,500 participants from 32 nations worldwide, it was the world’s largest vintage VW show. And what a show it truly was!

A show that starts with a road trip

First up, it makes a great excuse for a European road trip. It makes for a fun couple of leisurely days drive over to Hessisch itself. Meandering through France and Belgium, exploring and finding new places to stop over en-route. All part of the overall pre-show experience.

As the show gets visitors from all over the world, you get to see and bump into some pretty cool vehicles on the journey over to the event itself. At petrol stations, laybys and tea breaks, it’s easy to bump into other vintage VW’s making their way to the show.

Not only are you getting people from all over the world attending Hessisch, but it’s the range and type of vehicles at the show which is pretty mind-blowing. Vehicles that you often can’t even get to see in a museum, yet here they are, parked up on the streets!

You get to discover or see vehicles that either you’ve never heard of or seen before, parked on the beautiful and picturesque streets of this small German town. Walking around the town is like being in a massive outside automotive museum filled not just with cool cars, but lots of people, food stalls, entertainment acts and all sorts going on at the same time. Even if you’re not into cars, the town puts on quite an event for all to enjoy!

As its a car show, you also get to see a wide variety of parts, accessories, restorations and details on all the different vehicles. There is also a traders area swap meet to help find exclusive or crazy rare parts.

For what is an essentially simple basis for a car or van, the vintage Volkswagen scene has a huge range of variations, accessories and upgrades available to it. Plus over the years, as it has developed such a cult status, different styles or approaches have developed within the air-cooled ownership fraternity as to how people want their rides to be. And with technological advances, performance and options are many and varied. There is something for everyone’s taste or wallet!

There are so many variations. So many different approaches. It’s great that there are so many different examples of how people enjoy their air-cooled VW. The Hessisch Oldendorf show, however, is primarily about older, more original vehicles. That does not mean other styles are not in attendance in the camping areas and surrounding parts of town, just not so much in the town centre. There is always room for most things!

I love seeing some of the really early vehicles. To see how things have changed and developed over time or the production process. It’s like seeing an automotive family tree in the flesh (or metal).

My camping neighbour for the 2017 show was from France. He had driven to the show in his beautifully restored early bug. A real labour of love! A beautiful looking early beetle.

Accessories above and behind

From vintage skis to roof tents, there was always something to be amazed at when walking around the town trying to take it all in. This particular early and rare 15 window deluxe had every checkbox ticked. What an amazing bus!

It’s not always about accessories mind you. Sometimes less is more. There were plenty of other vehicles at the event that had much simpler appeal to me. They were on the road, loved by their owners and being used and having fun in. I love these vehicles. It encapsulates what I love the most about owning an air-cooled VW! 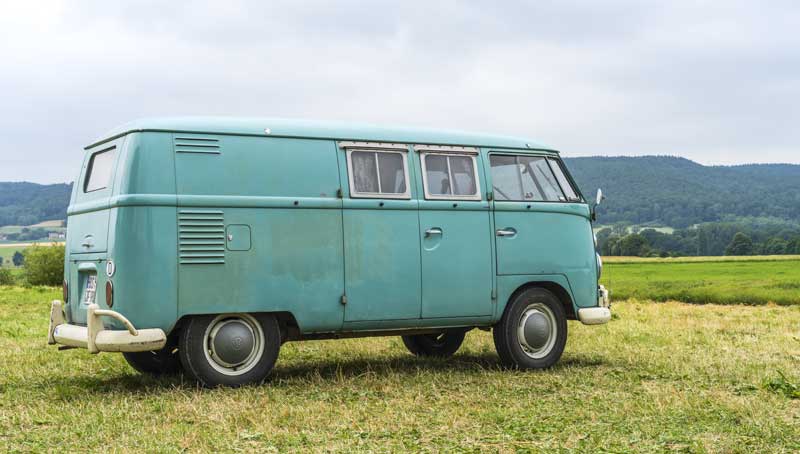 less is often so much more with this simple sock camper

One of my personal highlights of the Hessisch Oldendorf show was seeing the Schwimmwagens. The VW Type 166 Schwimmwagen (literally Swimming Car) are amphibious four-wheel drive off-roaders, used extensively by German ground forces during the Second World War. The Type 166 is the most numerous mass-produced amphibious car in history. To see them driving into the Weser river, and schwimming around is just brilliant! They even offer rides/schwimms in them to raise money for charity!

Am I excited and looking forward to the HO21 show? Just a bit!

Just doing what they do best…